Yesterday was another fabulous day trip. Myself, Emil, and 5 other of our volunteer friends went on a day trip to the sacred valley.

The Sacred Valley in the Andes Highlands was an important area in the Incan empire. It was most prominent from 1000-1400 C.E. This area included living quarters, fortresses, temples and tombs for royalty, and lots of agricultural production. Think of it as the suburbs of Cuzco, the Incan capitol.

On this 12 hour trip we had the pleasure of visiting the small towns of Chinchero, Moras, Moray, Ollaytatambo and Pisac. Each town contained relatively intact Incan ruins.

Map of our route

After leaving Cuzco at around 7am, we drove about a hour to the town of Chinchero.  Here, we were given a presentation of how the locals spin Alpaca wool. After a short presentation we were shown beautiful alpaca textile options to purchase. 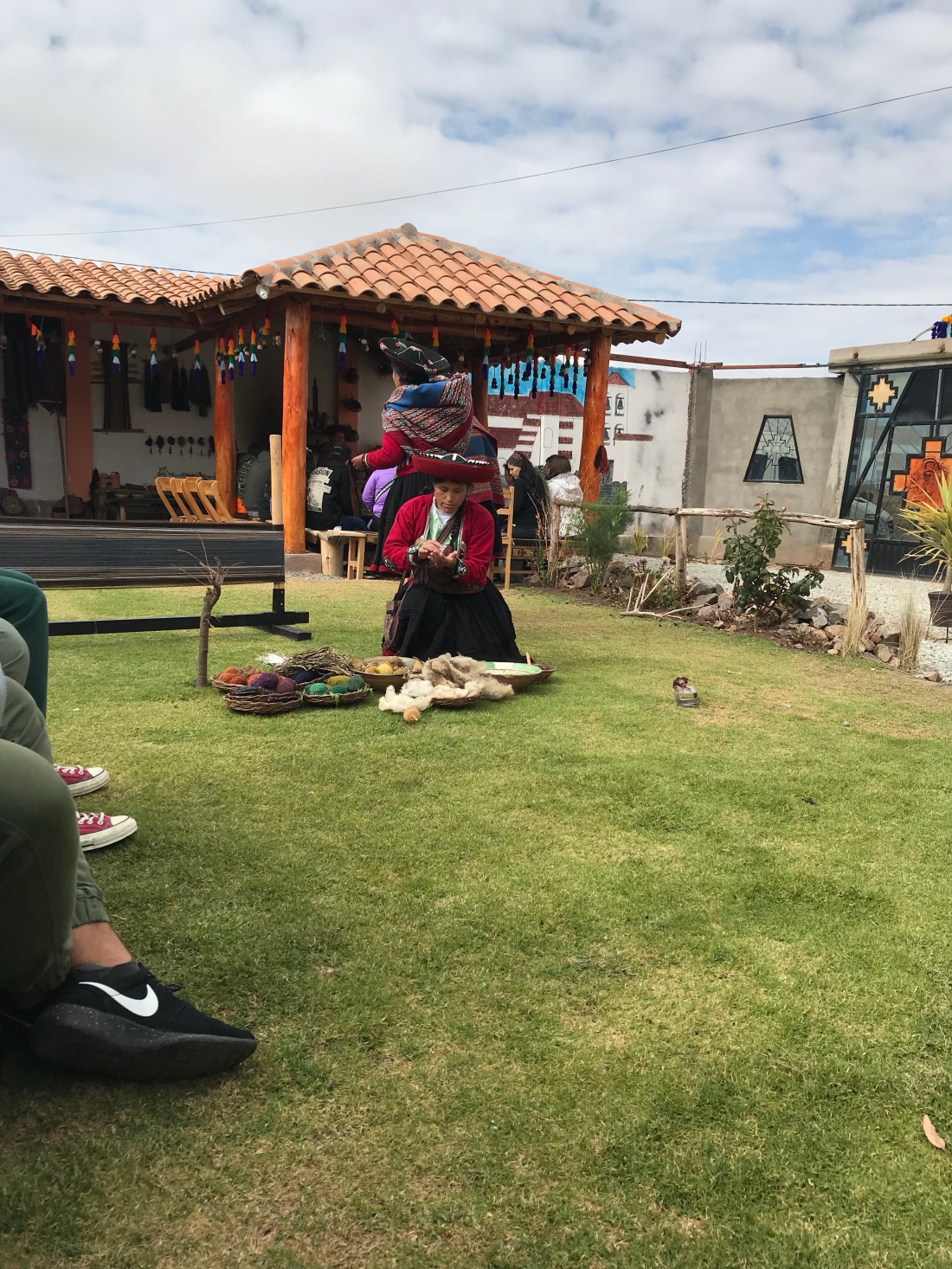 We also made a quick stop to a viewpoint of the ruins in Chinchero.

Here you can see the Incan terraces along with churches built by the Spanish, sometime around 1500 C.E.

Next, we drove about another hour to visit the archeological site known as Moray. This site is incredible. Large, circular terraces at the foothills of the Andes are still very much intact. These terraces were used to grow many different agricultural products and then were exported to different parts of the empire. One of the most interesting parts of the Incan agricultural process in this area is that the bottom of the terraces was filled with water, creating an artificial pond.  Water from the pond would evaporate and keep the products fresh. 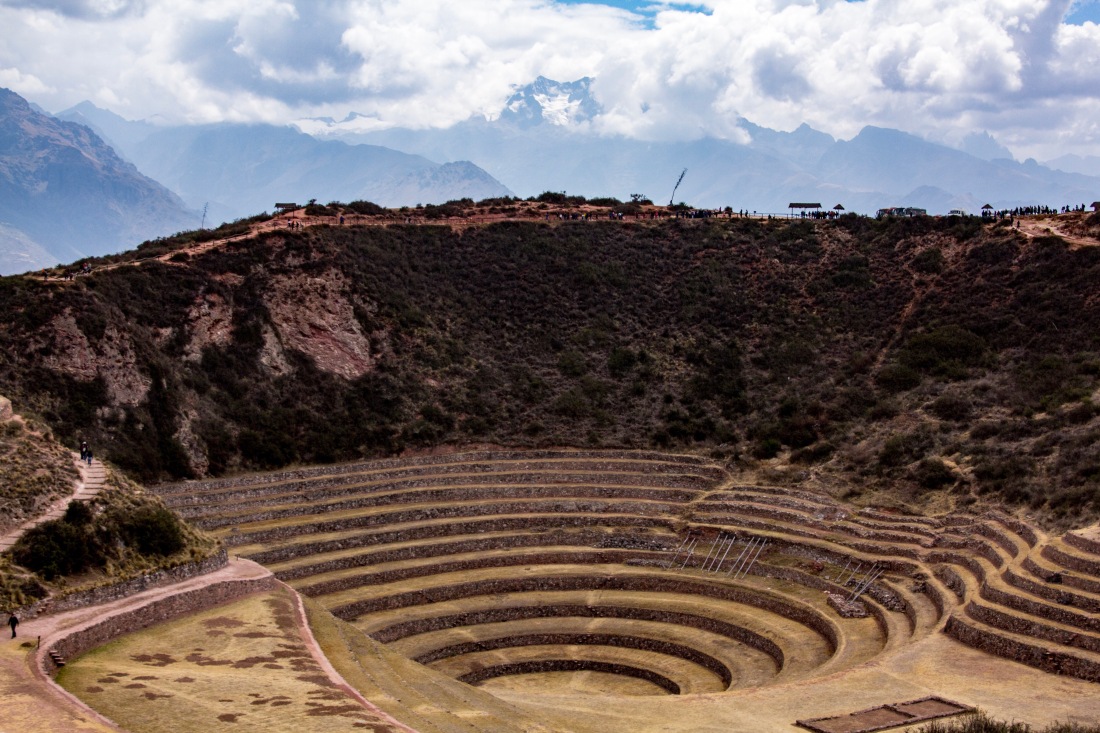 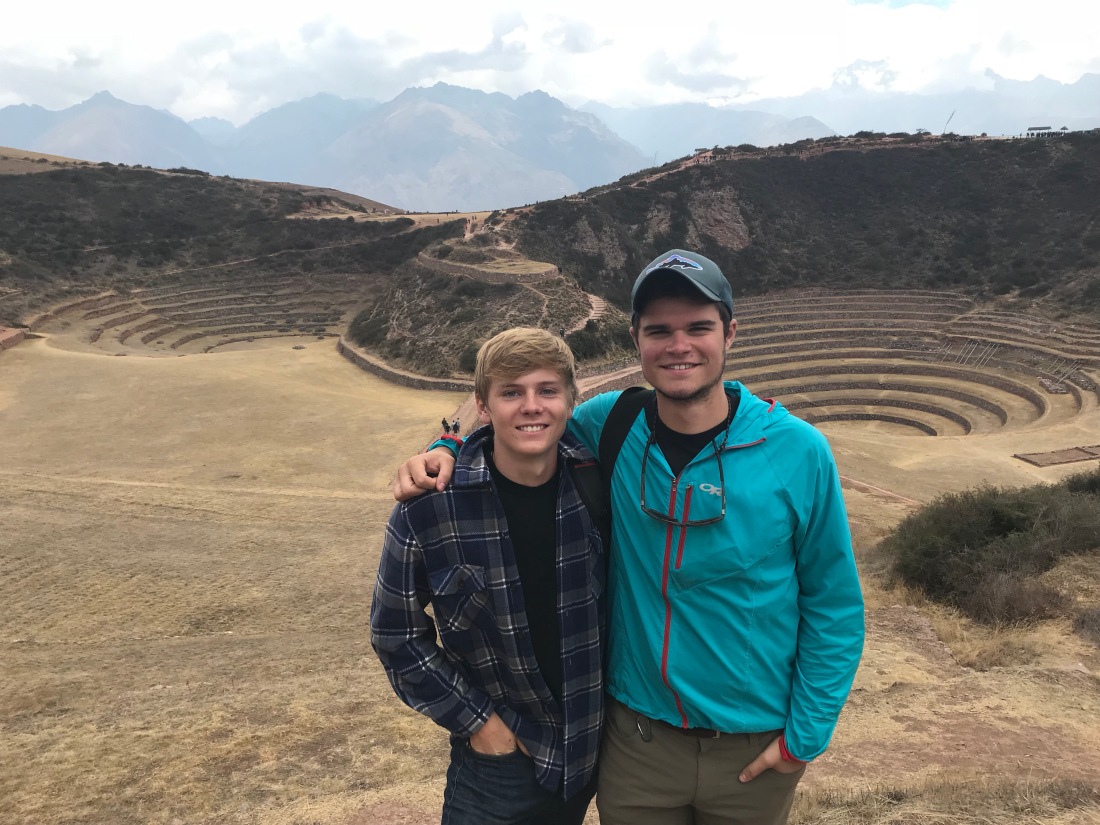 We then went to the salt mines in the town of Maras. The salt mines are absolutely incredible. Still in operation, locals have maintained nearly 2,000 different ponds of salt for nearly 500 years. The salt is still sold to export to other areas in Peru and nearby countries. The salt mines are owned collectively by the community of Maras. If a family would like to work on the mine, they are taught how to work on the mine, and then given a new pond, usually an unused pond further away from the community. The salt mines come from a salty- subterranean stream coming from the mountains. Ancient terraces on the mountainside funnel the water onto  rock, and it crystallizes different types of salt, depending on the rock type.

The view of the salt mines and surrounding  mountainside. 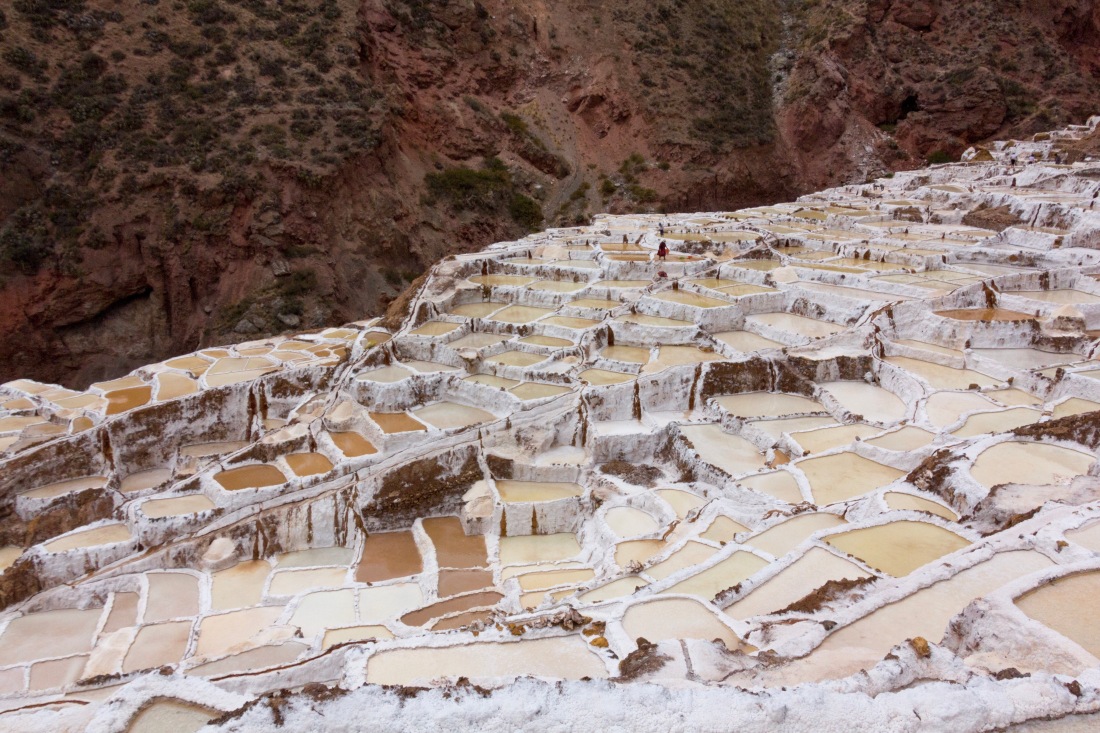 A local worker carrying a bag of salt up to the warehouse. 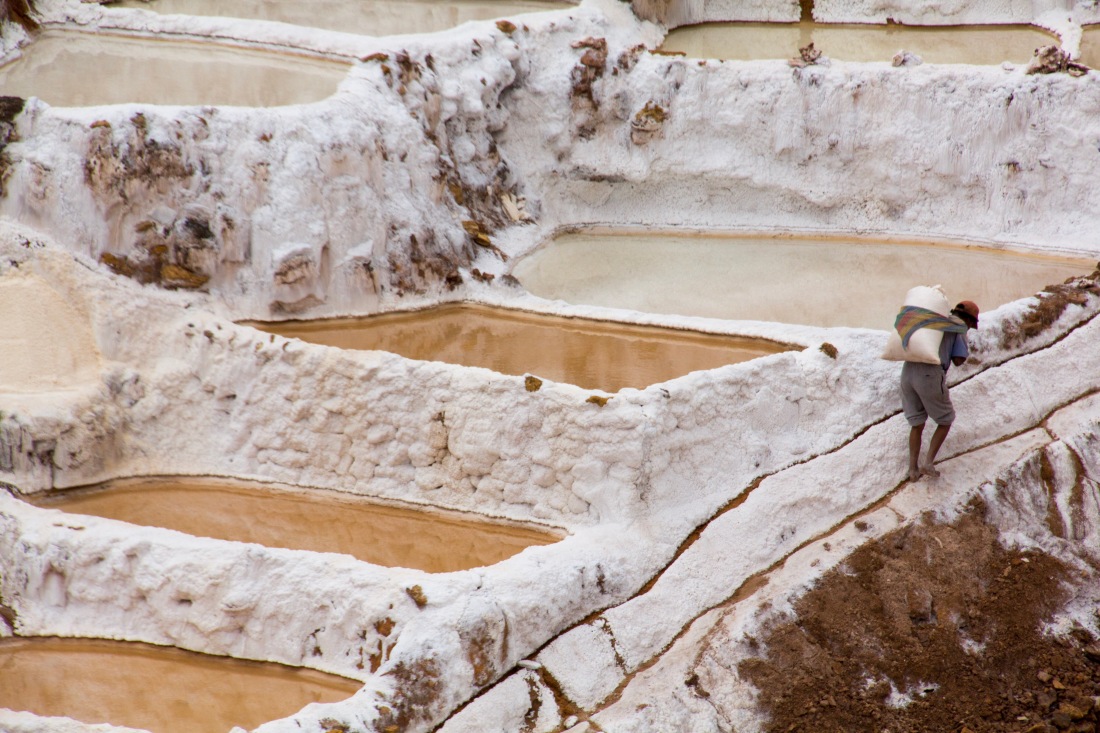 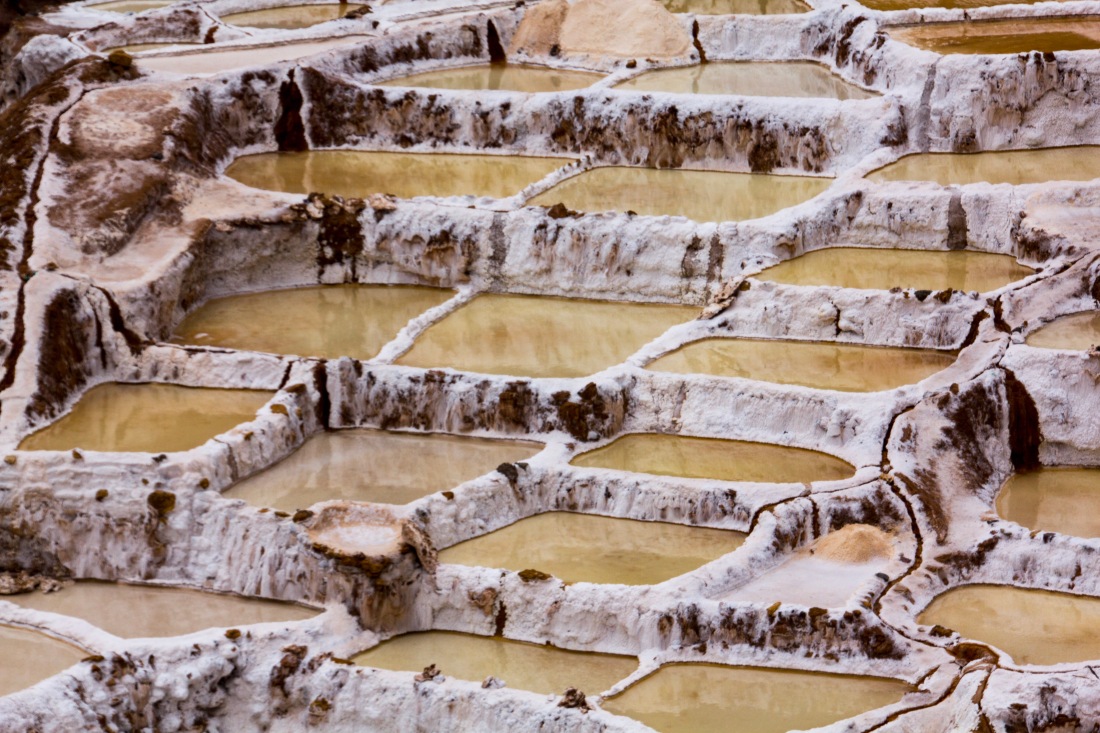 Amazing that the salt mines have been a source of income for the locals for more than 500 years.

After a stop for a great buffet lunch in the town of Urubama, we continued on to see ruins, in the town of Ollataytambo. This town is also known for being the start of the Inca trail. The classic “Inca trail” known to tourists starts in Ollataytambo and finished in Machu Picchu. The “Inca trail” is only a 27 mile part of the 29,000 mile road connecting the Incan empire at its peak.

In the first picture here you can see Incan “storage units” up on the mountainside.

In the second picture you can see part of the ancient aqueduct system.

At the time of the Spaniard invasion, the fortress in Ollataytambo was a very important line of defense.

For more info about the site at Ollataytambo, click here.

Our last visit of the day was to the town of Pisac. This site was the highest of the day. Sitting at an elevation of over 12,000 feet, the views are incredible. This site included terraces, living quarters, and Incan tombs. As soon as we got there, the temperature dipped and it began to pour. But then we were treated to a view that was completely magical… 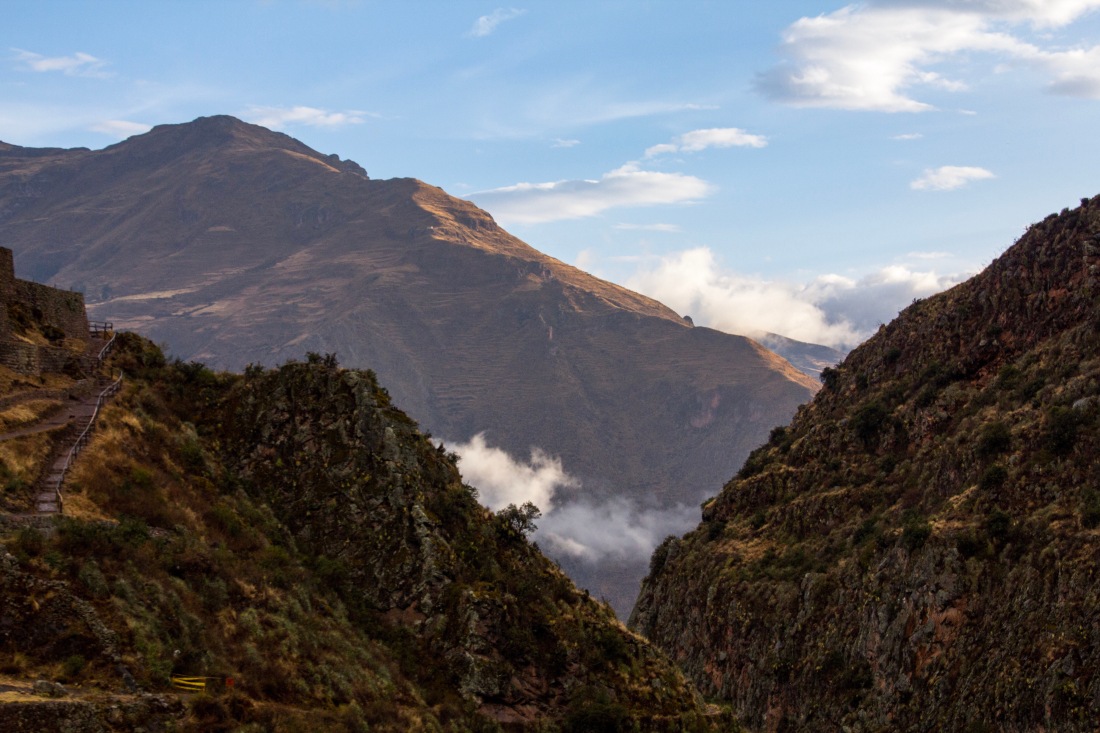 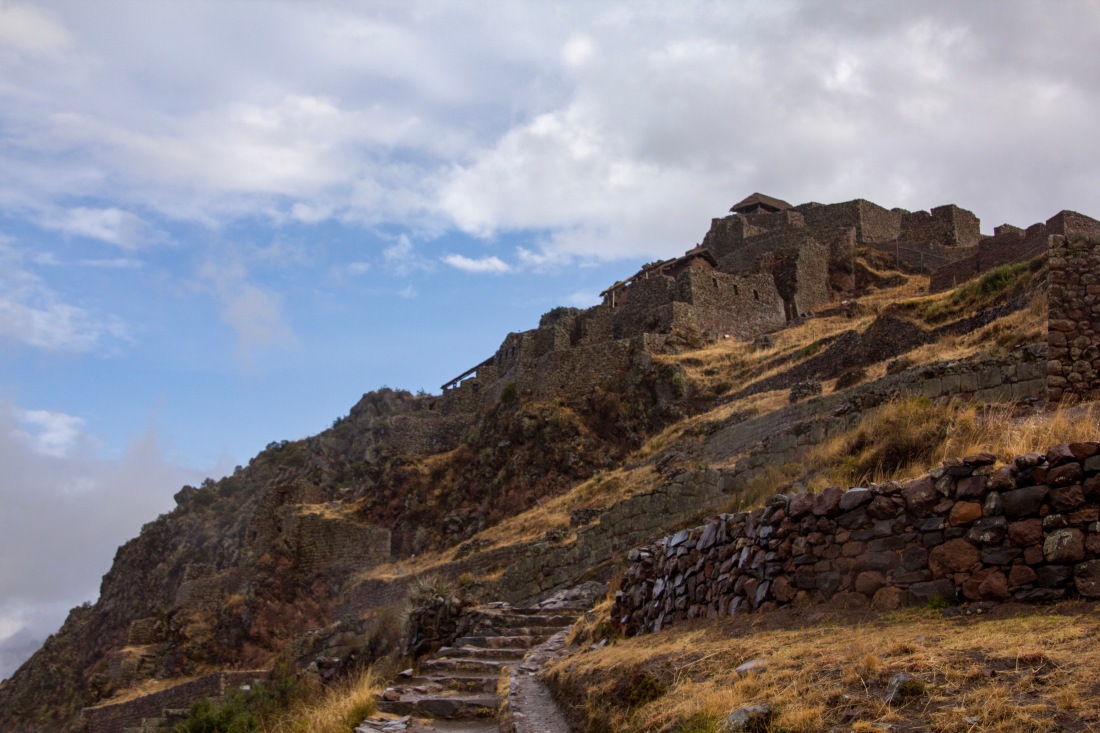 Overall, it was a great short tour of the Sacred Valley. This area is spectacular and is honestly magical. The architecture of the Incan ruins is mesmerizing. It is hard to believe how the Incas could construct homes and temples so far up on the mountainside.

And to the Incas the mountains themselves were sacred. And I can surely understand why. In a few weeks Emil and I will be climbing in that area. It will be a magical journey for sure.

For the 12 hour tour, along with lunch it cost us about $23. We also needed to buy a tourist pass in Cuzco to visit Cuzco area historical sites, including the historical sites from yesterday. The pass cost us $21 with a student ID, and allows us access to 15 historical sites for the next 10 days. Money well spent! Talking in Spanish and walking around the center of town leads you to some very cool and cheap tours…

And now for a volunteering update,

This week marks our last week of construction volunteering in Cuzco. So far it has been very rewarding, except that it has proven to be a long, tedious, process. Without the access to modern power tools the process is much longer. For example, last week I spent 4 days chiseling a floor in order to insert new tubeing, it would have taken no more than 5 minutes with a jackhammer to break apart the floor.

But overall it is gratifying. The first floor of the clinic is currently in operation, and multiple times the doctors and nurses have told us how much they appreciate our help. Very happy to be helping.

Last Friday we even got to play a little soccer after work! Highest game of soccer I’ve ever played; 11,200 feet. The building in the back of the picture is the clinic we are working on.

Marco, the man in the center is our director for the project. Here we have volunteers from New Zealand, U.S. , France, Germany, and Canada. It’s been awesome to meet a such great group of people. Several of the volunteers Emil and I have met either on site or at our house, are also taking a gap year, or a semester off of college. 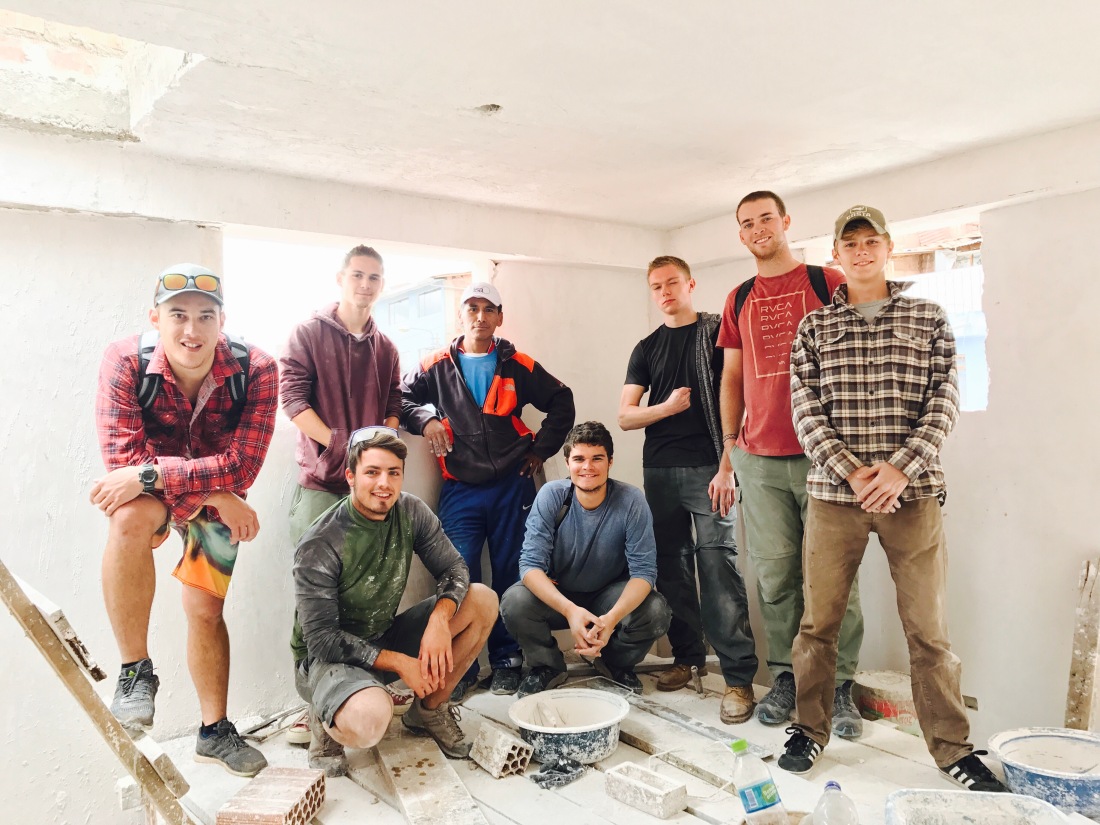 In week, Emil and I will be headed to Puerto Maldonado to begin our 2 week volunteer stint in the rainforest.

I’ll post some of my final thoughts on Cuzco next weekend.
-Jack

2 thoughts on “The Sacred Valley ”