7 days in town and we only got out for about 20 hours.

Let’s take a step back for a minute. Let me try to explain why we were so excited to be here in the first place.

A brief history of the climbing Capital of the world:

The majority of the controversy and history in El Chalten lays around a peak called Cerro Torre.

Torre is a monstrosity. Standing at just 10, 262 feet, Cerro Torre has a prominence of over 4,000 feet. 4,000 feet of granite walls shooting towards the sky.

In 1959, Italians Cesare Maestri and Toni Egger claimed they had made a first ascent on Cerro Torre.

Egger died in an avalanche on the descent and Maestri claimed that they both had summited, and that the camera had been lost in the avalanche. If true this would have been the single most incredible first ascent of climbing history.

But it’s unlikely they made the summit, I mean look at at that thing! Everest was climbed 5 years before this climb was attempted, but the technicality of this climb is unmatched. At that point in history, no one had explored this type of climbing. I believe it’s one of the hardest climbs in the world. There are a number of reasons that ascent was not believed, but over the last 30 years with the discovery of Egger’s body,

The controversy of this mountain continued. In 1970 Maestri returned, this time with a new team, and this time with a gas powered compressor drill. Maestri drilled 400 bolts up 1,000 vertical feet of the mountain, leaving it right before the rime ice mushroom. The 150 lb compressor is still up on the southeast face.

The first undisputed summit was in 1974 up the west face by a group of Italian climbers named from the “Ragni de Lecco” group (now dubbed the Ragni route).

Anyways, long story short there is a boat load of climbing history in this relatively small mountain range. Climbing here is climbing with the greats. I love history and I especially love climbing history.

(The sky line in El Chalten is also the basis for the Patagonia logo, and Mount Fitz Roy is named after the captain of the HMS Beagle)

We were in town to try and climb some easier glacier routes, and possibly get out onto the Southern Patagonia Icecap.

El Chalten as seen from the trailhead

The first night we arrived in El Chalten we happened to be staying at a hostel full of climbers. One of the first guys I met was planning on attempting the “Ragni” route up Cerro Torre.

We were invited to BBQ with the climbers and wow, what a time.

Everyone there was incredibly more experienced and talented than we were, but we were just happy to be here.

Even with what we were planning was crazy easy compared to their plans, they were impressed a couple of 18 year olds had made it to Chalten to climb. That felt good to hear. “You guys are the future of alpinism, good for you guys.”

Ironically, a British climber we met in El Chalten happened to know our guide back in Cuzco, Nate Heald. He even happened to read my blog about our climb on Humantay South! Pretty crazy.

And oh yeah, a professional climber showed up. We pretended to not know who he was, we needed to act casual of course.

Anyways, after that night, we were feeling pretty stoked. Rumors of a good weather window coming that weekend…complete stokeness…

Saturday (1/20) was a batch of good weather. For our first attempt we were planning on climbing Cerro Solo, a rock scramble/ glaciated peak visible from town.

I forgot to mention how crazy the weather is here. Being next to the Southern Patagonia Ice field, the winds whips from West to East, raging on the Fitz Roy and Torre Group. It’s not uncommon for there to be three weeks of 90mph winds and feet of snow in the middle of the summer. Some climbers come here for months at a time and only get 3-4 windows.

For our Cerro Solo attempt we left town at 2am on 1/19. We didn’t camp out that night because of the high winds so we decided to try and get some sleep in town. To get to the climb we first had to do the 5 mile hike into Laguna Torre, a popular day hike in El Chalten. By 3:30am we had made it to the lake. 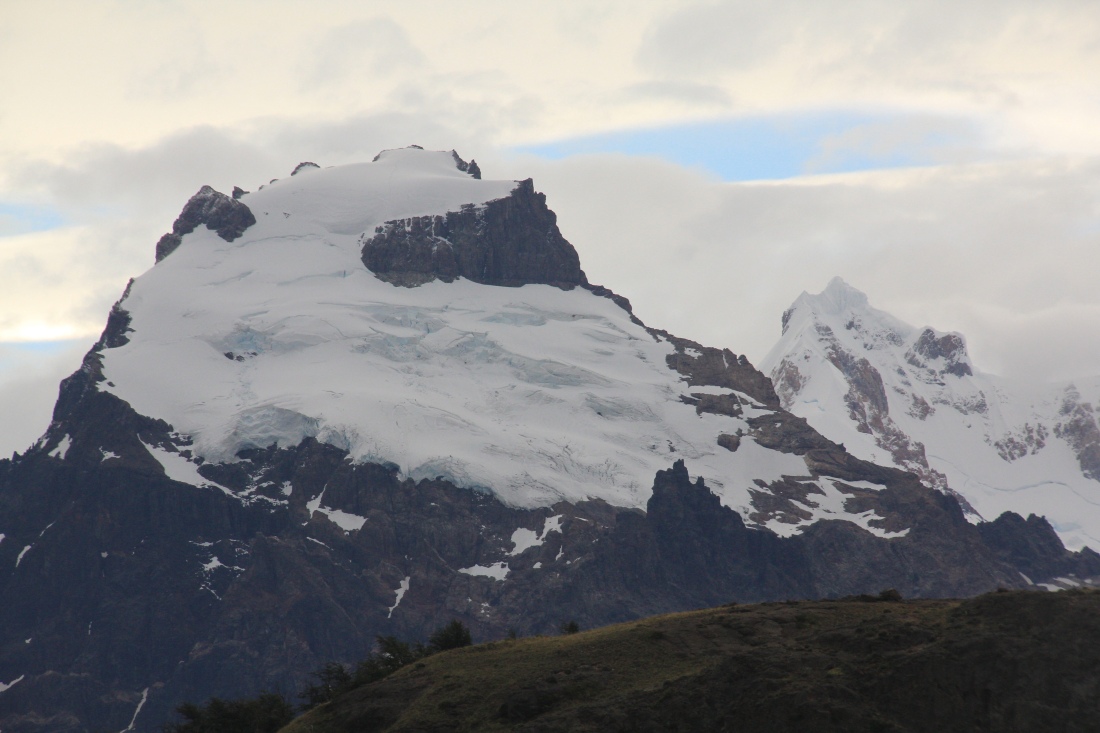 Cerro solo as seen from town

To reach this particular climb we would have to cross the Rio Fitz Roy, using a tylorean (rope you climb across with your harness.) I have to say this was one of the coolest things I have done this trip. Climbing upside down across a raging river at 3:45am.

Emil getting ready for the river crossing

Peter later in the afternoon, Cerro Torre in the background

After the river we continued our approach. This is where our luck the entire trip began to flip. During our 3,000 foot vertical approach to the glacier, I started feeling sick and decided I would turn back. I went back into the woods, and took an amazing nap for a few hours. Emil and Peter continued on until the toe of the glacier, when Emil felt sick and they turned back…

When the boys don’t sent it 😦 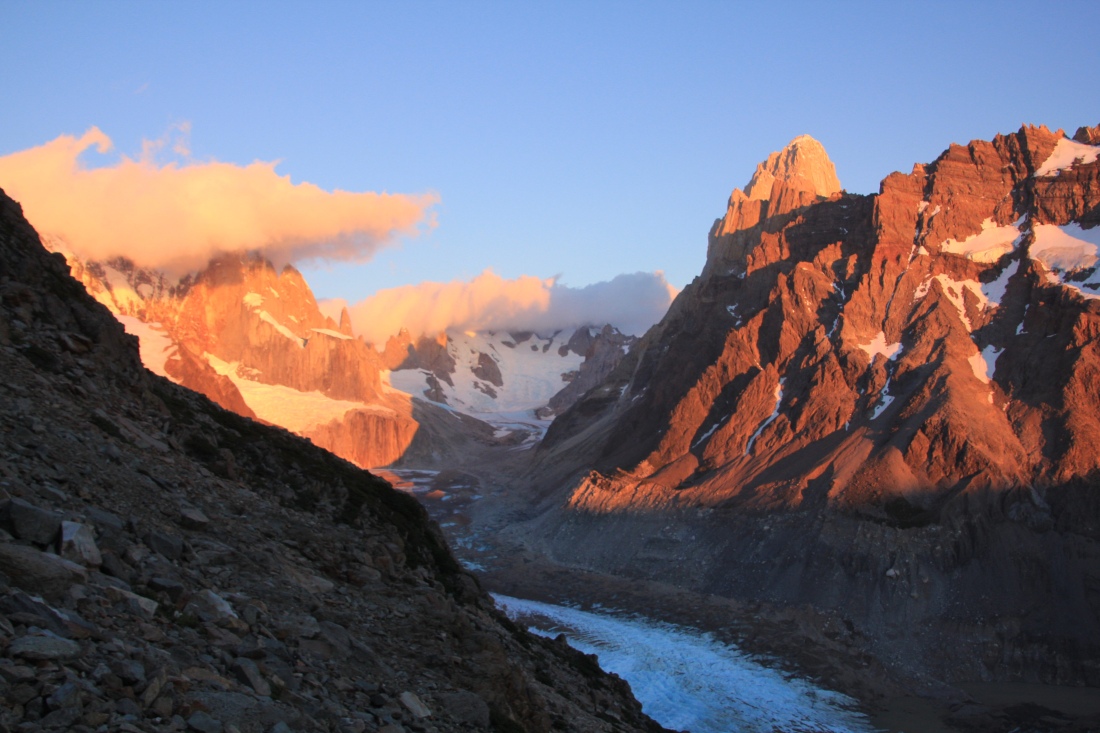 Sunrise on Fitz Roy. Cerro torre in the clouds

Still, hard to complain with that view.

Honestly, staring at Cerro Torre on a clear day has to be one of the highlights of the trip.

Glacier grande at the edge of Laguna Torre

And that’s where our misfortunes in El Chalten began.

We got back to town after a 16 hour push feeling pretty exhausted, and mentally down since we didn’t summit.

Monday was the next batch of decent weather. Tuesday-Thursday would be good enough to climb, some were saying one of the best windows of the season.

Our original plan was to attempt a peak on the Ice cap. We would leave Monday and come back Thursday or Friday. By Sunday we knew we wouldn’t be 100% for this expedition style climb.

Then we decided to leave on Tuesday, to try and attempt a peak called Cerro Eléctrico, a glacier/rock scramble right near Mount Fitz Roy.

And then we pushed it back to Wednesday.

Come Wednesday morning Emil was not doing well enough to climb. I was feeling 100% either. We thought about going backpacking but we ultimately decided to take the bus out of town. It was time to reset ourselves. It was going to be at least 5-6 more days before we could think about getting out to climb. Impatient yes, but we have other plans this trip. We decided for the moral of the group, it would be best to continue on north.

It was a disappointing decision, but it was getting hard to sit around, especially when the weather was good.

Considering that was one of the worst things to happen this trip, I really shouldn’t be complaining. Stuff happens. And we’re only 18. We’ll be back to climb in one of the most amazing climbing towns in the world. And when we come back, we’ll be more prepared, and faster and stronger. Maybe we’ll be talented enough to go for one of the big ones. But I know I’ll be back. I can’t be too upset about it.

If anything, visiting El Chalten and meeting other climbers makes me want to focus on climbing even more. We’re determined. The three of us are already planning what we need to do to get stronger. I can’t wait to get back home and spend all of the spring in the climbing gym. I have a good start, but I need to focus on getting better. Time to branch out and learn more about rock and ice climbing, on top of my Mountaineering skills.

Maybe we weren’t ready to climb amongst these amazing peaks. But we will be back. Soon enough.

Boys that take each other to the doctor in El Chalten >>>

Before we left town we took a short hike to the lookout of the range. Wow. Amazing. Also looking directly at the Patagonia logo in real life, so that was pretty cool!

Seeing the range clearly was very special. A bummer we weren’t climbing, but at least we could be here to witness that view.

Onto the next adventure!

After 2.5 months in Argentina we crossed the border into Chile. It wasn’t exactly the most fun border crossing.

We took the overnight bus from El chalten to Los Antigous (an Argentinan border town).

The bus ride was beautiful but 10/13 hours were on a rough dirt road so that wasn’t pleasant.

After arriving to Los Antiguos we took a cab right to the border. The problem with the crossing is that there is 3.5 mile road of no mans land between border check points. So you either walk it or drive if you have a car. We tried to hitch hike, but no one would pick us up. So started the longest 2 hour hike of my life. 70lbs of gear per person in bags that shouldn’t be carried for long distances. I won’t sugarcoat it. It was awful.

We didn’t get picked up.

Our plan now is to head to the small town of Cochrane. Near Cochrane is a place called Parque Patagonia, a park established by the founder of North Face, Doug Thompkins. It’s a possibility we will climb down there, but we’re not sure yet. This will be more of an adventure than our trip in Patagonia has been. Hopefully we will have some crazy camping, fishing, climbing, and hiking in our near futures.

Tonight we’re spending the night in Chile Chico, the Chilean town closet to the border. Tomorrow morning we will take the bus to Cochrane.

Let the next adventure begin!

It was hard to see this view leaving town. I’ll be back. Soon enough.

I’ve wanted to see this view in person for as long as I can remember. Speechless.

I don’t know when I’ll be able to post again but I will soonish. 1 month of the trip left, wow. Making every minute count.

One thought on “On Challenge and Defeat: the cursed week in El Chalten”