Well. Today marks the end of our gap year. I’m about to get on a plane en route to Colorado. And of course, we traveled to the end of the world, only to have an unfortunate accident take place 45 minutes from home.

Yesterday, Emil broke his heel on a lead ground fall. Myself, Emil, and our buddy Nick were climbing up at Sugarloaf Mountain. He fell about 15-20 feet right onto his left foot. It was compound fracture that resulted with an open wound. Heavy impact , the heel bone pushed out soft tissue which is why the mats in my car are so bloody. Emil had to get surgery that resulted with several screws in the back of his heel.

I feel completely awful. Emil is out of commission for 3-6 months. I definitely was not planning on spending my last day at home with my best friend in the hospital. But this guy is a trooper, and I know he’ll come back even stronger. I know he’s counting down the days until he can get back outside doing what he loves best. And of course, this is how these things go. Our last little adventure before school ends up with me driving Emil to the ER. But he will be back soon enough. Faster and stronger than ever.

We all made mistakes yesterday, but the accident shouldn’t be blamed on anyone. I probably could have done a better job with the first aid. But the fact is, I wrapped him up cleanly, and we both (somewhat) calmly drove 40 min down I-270 to the ER. We both kept our cool, and Emil will be ok. There’s no one else I could do that with other than Emil! We just laughed and cursed loudly the entire drive.

A special thanks to the climbers next to us for lending me first aid supplies, to Nick for assisting me with getting Emil cleaned up and collecting our stuff, and to Emil for keep his cool while his foot made the trail, the car, and the hospital look like a murder scene!

Thank you to the Suburban ER team for keeping Emil in good spirits, fixing him up nicely, and putting him on a great path to recovery!

Love you dude, you’ll be back soon enough.

He’s my accident report. This is the accident summary along with analysis on what went wrong, and what went well.

At around 8:55am a 19 year old male took a 16-20 foot ground fall in the Middle Earth area of Sugarloaf mountain in Dickerson, Maryland. The victim was leading an offwidth crack called White Quartz Wielder, a 39 foot 5.8 . The climber, a new leader, started up the crack and placed a #3 camalot about 7-8 feet above the ground. At that point the climber was on belay. The climber continued on up the crack, finding the offwidth crack difficult to place gear. He continued, traversing slightly right and prepared to place another piece of protection at around 16-20 feet. At this point the climber was on a route called Bloodguard, a 5.9 . It is good to note that the description for Bloodguard is that the first 15 feet are a runout, and the climb is rated “R” for protection. The climber reached to place an offset #5 nut at about shoulder level. Unsure of his first placement, he placed another offset nut, a #4. The climber did not clip into the lower nut and then was testing the strength of the #4 offset nut at about eye level. As the climber load tested the #4 offset nut, the nut slipped out of the main crack, and the climber lost his balance and fell to the base of the climb. Immediately after the fall, the climber was in deep pain and rushed to pull his left climbing shoe off. Removal of the shoe revealed an open wound with a possible fracture in the ankle/heel area. The climber was completely conscious and alert before, during, and after the fall. The climber fell in a crouched position, making contact with both of his feet, primarily his dominant left foot.

I was not belaying at the time and was standing at the base of the climb. The climber fell directly at my feet. His shins actually rubbed up against mine when we fell, I may have prevented him from getting further injury. It was evident that the climber did not make contact with his spine or head, which is very fortunate considering he was not wearing a helmet. I was not within eyesight of him when he began climbing, but as soon as I saw him I scolded him for not wearing a helmet.

When he fell to the ground and took off his shoe my first priority was attending to the open wound. I stupidly did not have my first aid kit with me, (I’m moving to Colorado tomorrow for school and it’s packed up with the rest of my belongings.) Myself and the belayer quickly wrapped a t-shirt on the patient’s foot to help apply pressure to the wound and slow the bleeding. I then walked down to group of nearby climbers and borrowed their first aid kit. I put plastic gloves on, and first sprayed the wound with water from a syringe. As I started to clean the wound, the belayer chatted with the patient and checked for other wounds, only finding minor scrapes on the right arm. After I cleaned the wound with the syringe, I wiped it with an antiseptic wipe, placed a gauze pad on the wound, and wrapped it with one ace bandage. The patient took 1300mg of acetaminophen and 650mg aspirin. It should be noted that the patient took the medication on his own and was not properly supervised on what/ how much he was taken by myself or the belayer. After noticing that the blood was heavily saturating the bandage, I instructed the belayer to create a tourniquet with the patient’s short waistband. The tourniquet was placed at the ankle.

After that, the belayer and I carried him down a steep rocky section back to the main trail, where I then carried the climber on my back about 7-8 minutes on a trail back to the main parking lot. I left the belayer with the rest of our gear, and I drove the patient about 40 min to our local hospital. We arrived at the hospital around 10:05am. The patient was admitted to the emergency room upon arriving at the hospital, the first X-rays revealed a compound fracture of the left heel (the left calcaneus). It was a compound fracture that led to an open wound, the entire fracture was strictly from the impact of landing on the left foot. The patient later went into surgery and several screw were placed in ihs heel. He has been given a recovery time of 3-6 months. It will be at least 6-12 weeks before any rehab can begin on the left foot.
Analysis:

Several procedures went very wrong and some went well. To start, the lead climber should have been wearing a helmet. Even on short routes a lead climber, as well as the belayer should always wear a helmet.
Because the climber was a new leader, it would have been a good idea to top rope the section first to find more about what the protection is like. The #3 camelot was a solid placement, but not high enough to arrest the fall. In hindsight, the climber should have clipped into the lower offset nut, even if he was not completely confident. In trad, place early and place often. (Of course there are not always places to place gear). A combination of the climber being too high without a second piece of protection, holding the rope out as if he was clipping, and the climber traversing slightly right made it essentially impossible for the belayer to catch the climber and prevent a ground fall. I don’t think the belayer did anything wrong. There was slack in the system because the climber was preparing to clip. Lastly, as we are all new leaders, it may not have been a bad idea to have one or two crash pads at the base of the climb, even for such a short climb. Failure to learn route beta most definitely made a huge impact in the fall. Although the climber was leading, it is important for all members in the party to have a good idea of what the route is like. The leader should have not ventured into an “R” rated route, but of course, myself and the belayer had no idea of that information. Information that could have allowed us to make important suggestions during the climb.
The climber definitely fell correctly. All those indoor bouldering falls definitely helped today. The climber lander on his feet and crouched to prevent his back, neck or head from hitting the ground.
I did not have a first aid kit with me, which was terrible oversight. The shortness of climbs, and proximity to the parking lot makes the climbing at Sugarloaf seem like a first aid kit was not exactly necessary. Yes, my kit is packed for my move to Colorado but that is still not an acceptable excuse. From now on I will make sure to bring my kit with me, no matter how small or simple the trip may be.
Fortunately I had access to a first aid kit. I did not effectively go through a full patient evaluation because my biggest concern was attending to the open wound. If the patient had not been coherent I think I would have gone through a bit of a stricter protocol. I also should have taken the patient’s heart rate soon after I bandaged up the wound. The tourniquet was a very good idea, I think he would have lost a lot more blood had my other friend not put one on. However, I should have used a larger tourniquet and possibly placed it above the knee. One of the responding doctors complemented the dressing of the wound and the tourniquet. Another good idea could have been to put a SAM splint on top of the foot and lower shin in order to stabilize the ankle and heel area. One large mistake I made was not supervising the patient while he took pain medication. I should have not let him take aspirin, as that can be dangerous when rapidly losing blood in a healthy patient. I should have also recorded all the medication that he took, as we only have an estimate. Lastly, the patient took several sips of coffee in the car on the way to the hospital. I should have prevented him from eating or drinking anything, in preparation for possible surgery.

At the end of the day, I felt the reaction was appropriate and my friend and I got the patient down to the hospital in a very effective time frame, only about a hour and ten minutes, including a 40 minute drive. There were definitely many mistakes made, but this is not the result of one person’s actions. We live and we learn.

Carrying Emil back to the car 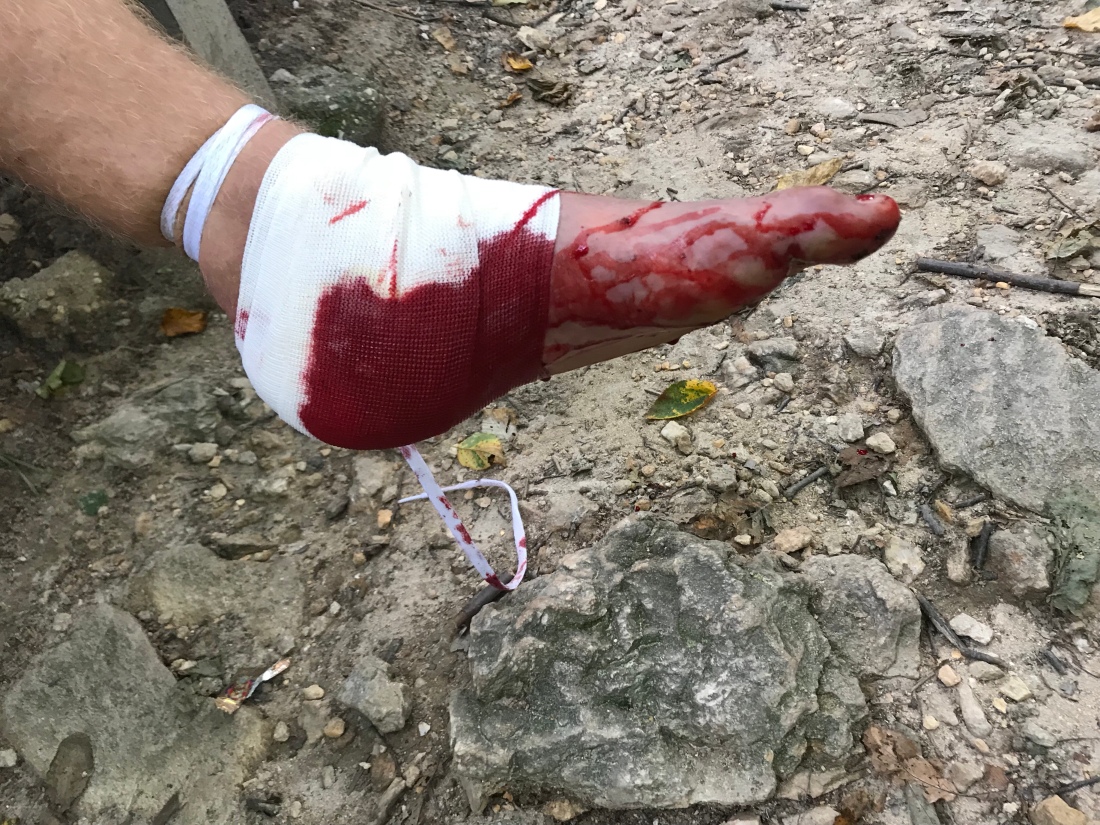